Spare a second for the one on two: an expert view

Before I could send this email, another piece of tragic news surfaced last evening (28Jan13). Two brothers on a bicycle, 7 and 11, were run down by a cement truck, died on the spot at junction of Tampines Ave 9 and Tampines St 45.

This township is supposedly the first cycling friendly HDB town. While our legislation is strong (read on) and education ongoing, infrastructure to manage vehicular traffic needs improvement.

We need to implement more “traffic, speed calming” techniques especially at strategic points. This accident happened within 100 metres away from a school. A sad day for cyclists and a more tragic day for their parents. I grew up cycling to school.

Following my piece on “spare a second for the one on two”, a member with tons of domain knowledge has this to say. For years, he cycled to work in HP. He mountain biked, he goes on cycling trips and he drives too. He must also be the coolest grandpa who brings his brood cycling! With his permission, here goes….thanks for sharing Chee Hei.

Jok Kwang,
I got hit by a driver who was entering the main road from a side road — I was on the main road. Fortunately I realized in time that he was going to hit me and I managed to hop my rear end creating just enough additional distance that it reduced impact. Still, there was sufficient impact that it ruined his license plate. Perverse justice — me and my bike unharmed. Only reason I managed to get out of this one was that I always try to make eye contact with the driver when he’s in front of me and in this case realized that I couldn’t establish that.

Obviously this isn’t going to work if he’s coming from behind. I have contemplated mounting a rear facing GoPro camera prominently on my helmet. If enough cyclists are known to do this, it may become a small deterring factor to some recalcitrant motorists. But for now this remains just that — an idea. Meanwhile, I do my best to acknowledge courtesy accorded to me by any motorist while also acknowledging and signalling apology if I feel I could have been an obstruction e.g. occupying the left edge of the road and leaving insufficient space for the bus following to pass me. Hopefully this will contribute towards a more favourable view of cyclists.

Without wishing to point fingers, there are some of us “serious” bikers who feel that they have full right to the road including occupying the full lane whichever one that may be. Us locals are guilty too but there’s a particular “Ang Moh” group called Anza who are particularly obnoxious even to other cyclists. Never used to feel this racist before but I have had quite a few run ins with them on bike and car — they use a dull orange jersey with a horizontal black strip across. Guys like that don’t help the cause of cyclists.

And you may also have read about Burry Stander’s death today — he place 5th in the Olympics MTB cross country race. Although he wasn’t duking it out with the leading 4 riders, I remember his gutsy climb up the race order after a poor start. And before that Bradley Wiggins, Tour d’France and Olympic gold medal winner got hit by a 21 year old woman van driver resulting in a broken rib. Next day, his coach got hit. And a couple of months later his team mate, Chris Froome got hit.  So this isn’t a Singapore only problem. In fact, the Malaysian cyclists were telling me that a few of the Malaysian national cyclists had switched to mountain biking to avoid being on the roads (hearsay to me as I don’t know which Malaysian riders switched). The logic given which I subscribe completely to, is that with mountain biking, it’s between you and the trail to come to a peaceful arrangement…no one else to blame for any accidents i.e. full accountability for riding safely.<

* This is the truck driver who hit-and-ran. Four hours later, traffic police managed to trace his vehicle and brought him to justice. From time of accident until he was charged is just over 2 months. While justice was served swiftly, we are still lacking in education and signs to inform motorists that cyclists do have a right to be on roads too. 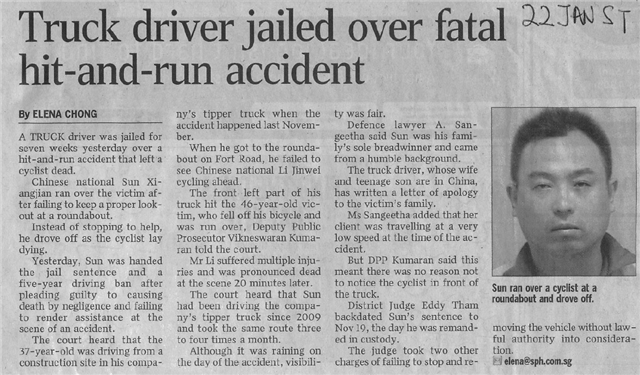